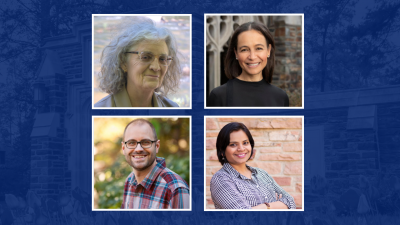 The Arts & Sciences Council’s Committee on Undergraduate Teaching has announced this year’s recipients of awards for excellence in undergraduate teaching.

Each recipient was recognized at the council’s Sept. 8 meeting, where Committee Chair Connel Fullenkamp expressed appreciation for the many nominations across all three Trinity divisions that included “creative and inspiring” portfolios.

“It made our decision very difficult because there are so many varieties of excellence that we see in our community at Duke,” he added.

This year’s award winners are:

“The thought-provoking and stimulating interactions that occur every day between Duke students and our talented faculty are vital to maintaining the vibrant intellectual community at the core of our identity,” wrote Interim Dean Mohamed Noor and Dean of Academic Affairs Martin Smith in an email announcing the award winners.

The committee accepts nominations annually from Trinity department chairs or Directors of Undergraduate Study (DUSs), which are supplemented by teaching statements from the nominees themselves.

Read more about this year’s recipients and see previous honorees on the Trinity College website: https://trinity.duke.edu/faculty/award-winners